I’m not ashamed to say that I like root beer. There’s something about the herbal and woodsy flavors that I enjoy. It’s refreshing, but also a time machine. A sip of root beer brings me back to my childhood and makes me feel like a little kid again. More so than any other drink, it is classic Americana. And if I ever have the option of drinking root beer, I’ll choose it over any another soda. But as much as I love root beer, there’s one thing that really grinds my gears, gets my goat, and burns my bacon: A scientist stole my root beer.

Root beer has, in some way, shape, or form, been around for centuries. People undoubtedly mixed roots, berries, and herbs together in water to create teas and elixirs, either to make polluted water more palatable or as some sort of remedy. Throw in some sugar to make it go down easier and a little local yeast from, well, everywhere, and voila, you’ve got fermentation and beer. These types of drinks were popular in colonial America, and called “small beers” because of their low alcohol content, around 2%.

But the man that gets the glory for “inventing” root beer is Charles Hires, a pharmacist with an entrepreneurial spirit. Legend has it he was on his honeymoon and came across a tea that he particularly liked. Upon his return home he replicated the recipe and sold it as a “cure-all” elixir, which were all the rage at the time. His concoction was originally called root tea, but he renamed it root beer shortly before he displayed it at the 1876 Centennial Exposition*, supposedly to make it more appealing to the working class. Hey, it works for me. His genius came in not just selling root beer, but marketing it, and selling kits so that people could brew their own at home. Then in 1884 he made a liquid concentrate, a.k.a. syrup, so that people could skip the brewing process and “just add water.” This is still how we deliver and sell root beer and other sodas today.

* The 1876 Centennial Exposition is also famous for giving us Alexander Graham Bell’s telephone, Remington’s typewriter, Heinz ketchup, and Kudzu, the invasive vine and scourge of the South.

So what’s the “root” in root beer? That would be the roots, and bark, of the Sassafras tree, and used in making America’s iconic root beer all the way up to 1960. Native to the Eastern United States, Sassafras albidum is a deciduous tree of medium height (~30 feet) that is often grown for its ornamental appearance and fragrance. In the fall the leaves turn spectacular shades of red and orange. In the woodsy wild, Sassafras trees are easy to identify because the leaves are shaped like mittens. Seriously. You’ve got a left and right handed mitten, and a double mitten, like for people with two thumbs on each hand. Just look at the photo, it’s easier that way.

The fragrance of Sassafras comes from essential oils present in the roots and bark of the tree. Notable chemicals include aromatic compounds like α-pinene (pine scented, duh) and camphor (Vicks VapoRub) as well as possible hallucinogens thujone and myristicin – which you’ve read about here, of course. But the chemical getting all the glory, or the blame, is safrole – and if you remember your myristicin, you’d see that they look a lot alike.

Safrole is the primary constituent of Sassafras oil, but when reading about safrole and why it was originally banned from use in root beer, I see a lot of bad math, which I think propagates itself into other write-ups – without references of course. But here’s what I came up with, which is the absolute best case scenario for determining safrole concentration in Sassafras root, but also not an indicator of what you’d find in a steeped tea. I’ll explain.

From 150 grams of ground Sassafras root a total of 0.68 grams (680 milligrams) of safrole was extracted using 3 liters of “petrol”, a low boiling mixture of hydrocarbons that dissolves non-polar (read: greasy) things, like safrole, giving a total percent yield of 0.4% safrole (1). And that’s coming from two sets of extracts: one that yields 0.44 grams of oil that is 90% safrole and one which is 4.87 grams of oil but only 6% safrole. What I often read is along the lines of: Sassafras contains ~3% essential oil of which 90% is safrole. It’s true that there is ~3% essential oil, but only one extract in this case is 90% safrole. If you do the math, you’d calculate that safrole makes up 2.8% of the total extracted oil. So right off the bat, people estimate safrole almost 10-times too high.

Enough math. The point I really want to make is that this is a best case scenario and not representative of a real world scenario. First, the above experiment is using ground Sassafras. And when I say ground I mean like coffee grounds. Second, they are extracting out safrole (and other oils) using a non-polar solvent. They have to, because safrole is insoluble in water. It is literally like oil in water. I don’t know how you make your Sassafras tea, but most people don’t have the ability to grind wood into a powder and they sure as hell aren’t mixing it with gasoline. So the amount of safrole extracted from small chunks of root in hot water? I don’t know, but I can guarantee you it’s much, much less than 0.4%, and likely more along the lines of 0.04%.

I’m actually getting a bit worked up. Can you tell? So why my fixation on safrole? Because some jackass thought it would be a good idea to feed it to rats and see what happens. And if your agenda is to show that safrole is toxic, feed them huge amounts. Like 0.5 grams per kilogram of body weight every day for 2 months (2). To obtain this much safrole naturally, the rat would have to eat it’s body weight in sassafras root every day. What happened? They established an LD50 (lethal dose for 50% of the population) in rats of 1950 mg/kg. They also saw liver damage and tumor formation, at high doses, due to safrole-DNA adducts attributed to a metabolite found in rats, 1′-hydroxysafrole (3).

Liver damage and cancer is bad. Period. But obviously I’ve got some issues, at least that’s what everyone tells me. I hate the “scale-up game” between rats and humans. It just doesn’t work. Rats and humans aren’t the same, and we don’t metabolize things the same. With that said, to just give you an idea of the magnitude we’re talking about, if I wanted to consume 0.5 grams/kg of safrole, and assuming I can extract out 0.04% safrole from Sassafras root chunks in water, I’d need to boil up 170 pounds of sassafras root…in about 400 gallons of water. If I had to dig up 170 pounds of Sassafras root every day for 2 months I’d die from exhaustion long before the cancer got me. Now obviously you don’t want liver damage. Or cancer. I don’t even want an LD1, let alone an LD50. But hopefully you can see how ridiculous this is. But the best part is that hepatocarcinogenic metabolite, 1′-hydroxysafrole. Remember that one, the one that messes with the DNA? Well, it’s not even found in humans (4). Really? Seriously.

So we’re left with a chemical that’s insoluble in water, in already low concentrations, causes damage in rats at obscenely high amounts via a metabolite not even found in man. What’s the U.S. government to do? Ban it of course. In 1960 the U.S. Food and Drug Administration banned the addition of safrole in foods. Never mind that safrole is present in every day foods like cinnamon and basil. This bone-headed decision forced root beer brewers to abandon Sassafras roots and extracted oils, and instead turn toward other additives to make up for the flavor loss.

Throw in the fact that I can’t find any cases of people becoming ill, let alone developing cancer from drinking root beer or tea made from Sassafras root, despite being used for centuries, makes me think there were either some shenanigans going on at the FDA or some really bad science. I vote for bad science . . . with a dash of conspiracy.

So what does “real” root beer taste like? I have no idea…some scientist stole it from me. 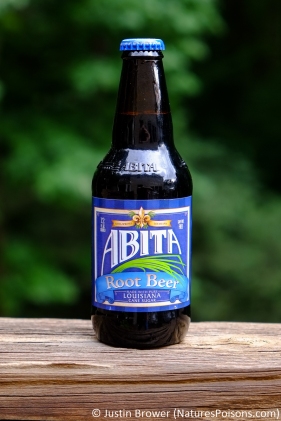 56 thoughts on “A Scientist Stole my Root Beer”