A mystery writer friend asked me about oleander, the evergreen shrub that thrives throughout the southern United States, a little while back. Being the smart-ass that I am, I asked her who she was planning to kill and she said a dog. What, what, what? Relax, it’s a dog in the mystery novel she’s writing. I gave her my 60-second spiel on oleander poisoning, and then told her I’d just write about it. So here we are, let’s begin. 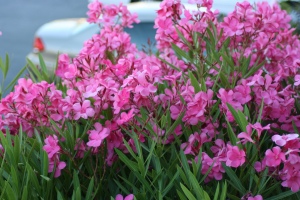 Oleander by Swaminathan (CC BY 2.0). Growing wild on the mean streets of Sunnyvale, California.

Oleander, Nerium oleander, and not to be confused with its cousin yellow oleander, thrives in sub-tropical regions where it is wet and warm. Good soil, bad soil, it doesn’t care, it’ll grow. Oleander probably originated in southeast Asia, though no one is 100% certain of that, and gradually migrated to the Middle East, North Africa, and the Mediterranean. As an evergreen it keeps its leaves throughout the year and blooms in the spring and summer with clusters of white, pink, or red flowers. By nearly any definition, it is a pretty plant, which is why it is used extensively for landscaping throughout the southern U.S. If you’re driving around in southern California, you’ll see it planted in the medians of the freeways, as landscaping for homes and businesses, and in wild open spaces. The same goes for the Gulf region of Texas, particularly Galveston, which is known as the “Oleander City.” Introduced to Galveston in the 1860’s by local businessman Joseph Osterman, who obtained it in Jamaica, oleander quickly spread throughout the island thanks to his sister-in-law, Isadore Dyer. And when Galveston was completely destroyed by a hurricane in 1900 – making landfall as a category-4 and killing ~10,000 – oleander was a natural and popular ornamental landscape choice for the rebuilding.

Much like “wild ginger“, traditional herbal remedies used oleander for thousands of years to treat vast arrays of illnesses. Even today, in relatively remote locales such as the South Pacific islands of Fiji, oleander is used to treat baldness, bruises, toothaches, and even syphilis (1). But is this a good idea? In a word, no.

Oleander, like all plants, contains dozens, if not hundreds, of natural products. The most prominent chemicals are cardiac glycosides like oleandrin, folinerin, and digitoxigenin. Of these, the most notable is oleandrin, and if the term cardiac glycoside rings a bell, congratulations, you read the post on foxglove and paid attention. Oleandrin, like digoxin found in foxglove, inactivates the sodium-potassium-ATPase pump. This deactivation causes an increase of intracellular sodium and calcium, and an increase in serum potassium, which is known as hyperkalemia. All together, the net effect is a decreased heart rate and increased cardiac contractility, which is a good thing if you have congestive heart failure. In toxic levels though, the myocytes (a type of muscle cell found in the heart) become sensitized to oleandrin, resulting in ventricular arrhythmias, a rapid heart beat that could lead to a loss of electrical activity in the heart (asystole) and sudden death (no explanation needed). (2)

Other clinical features are gastrointestinal and include nausea, vomiting, abdominal pain and diarrhea (or diarrhoea for you UK-ers). Neurologically one could expect tremors, drowsiness, and xanthopsia. Xanthopsia? That’s the increase of yellow in vision due to a yellowing of the eye’s lens, and a consequence of disrupting the sodium-pump. Treatment is typically activated charcoal to absorb the drug (use of gastric lavage is becoming less frequent), supportive care, and digoxin specific Fab antibody fragments given intravenously. Though oleandrin is not the same as digoxin, the treatment still works and greatly reduces fatalities, but is expensive. If you arrive at a U.S. emergency department unconscious, and the “wallet biopsy” shows you have good insurance, you may be in luck. (2) 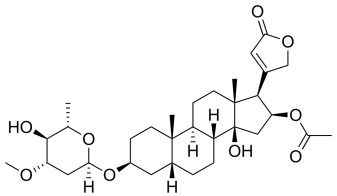 Now there’s some good news, and some bad news. Mostly bad. Oleandrin is present in every part of the plant, from the roots, to the leaves, right out to the tips of the flowers. So any consumed part has the potential to be toxic, if not lethal. But the good news is that the oleander plant doesn’t produce nectar! Why on earth is that good news, you ask? Well, since we have so many of these flowering poisonous plants throughout the United States (and world), it’s nice that we can’t become sick from the honey of pollinating bees, like with “mad honey” and the grayanotoxins of the rhododendron. So without nectar, how does oleander become pollinated so it can flower? By being a dick, that’s how. In a nutshell, out-of-the-loop bees go to collect nectar from these oleander flowers, pollinating them along the way, only to discover “Hey, there’s no nectar here. What a dick.” Botanists call it deceit pollination. I call it dick pollination.*

* I guess that’s how most animals reproduce. But I’ll stop, I can see this getting wayyy out of hand. That and I’m really twelve and can’t stop grinning.

The larger question is whether or not people become ill or die from oleander poisoning, and the answer is a resounding yes. You’ve got your accidental poisonings, suicides, homicides, and even the poisoning of livestock. Oleander doesn’t discriminate.

In an unusual case coming out of Italy, two young individuals, a man and a woman, were found dead in a forest (3). Both were malnourished, weighing 83 pounds each, and wearing shabby clothing, and with no money or provisions. Autopsy revealed no anatomical cause of death, but vegetal remains were found in their gastric contents (stomach). Using a radioimmunoassay the toxicologists detected oleandrin in both decedents and determined it to be the cause of death. It took 4 years though for the pair to be identified. The mother of the young woman, who was Belgian, told authorities her daughter had run away with a vegan 6 months before her death. Apparently this pair were “extreme vegans” because they somehow decided to only consume food that they could find while wandering about . . . in Italian woods, I suppose. Whether or not the emaciated pair ate oleander as a source of food or if it was a knowing suicide is impossible to determine, but the end result was the same.

This is just further confirmation that Nature’s Poisons are all around us, even in things that we plant on purpose for aesthetic reasons. So unless you know what you’re doing, don’t eat any strange plants. And remember, oleander’s a dick.

20 thoughts on “Oleander: Poisonous and Kind of a Dick”