Conspiracy theories abound in today’s society. They captivate people’s imaginations in all forms of art, whether it be books, movies or music. We voraciously read Tom Clancy novels and immerse ourselves in the spy world of Jack Ryan, we watch the Jason Bourne trilogy (also a superb set of novels, by Robert Ludlum), and pour through Tupac Shakur lyrics to prove he faked his death.

But conspiracy theories don’t stop with entertainment, they permeate history. We have George Washington and his green-skinned alien pals forging the destiny of America, the Cold War induced faking of the Apollo-11  Moon landing, and the cover-up of the attacks on September 11th, 2001. Take any historical event, and there is a conspiracy theory behind it

A conspiracy theory is simply an idea held to explain an event using imagery of cover-ups, secret societies, or nefarious illegal actions. Often it is a way to help make sense of tragic events, events that some may call evil. How could anyone murder 26 children and teachers in Sandy Hook? How could anyone murder 12 movie-goers in Aurora? So I can see why someone would want to believe they were hoaxes. I wish they were, too.

People that give some conspiracy theories credence are those, like myself, that look at the evidence and think, “Hmmm, something’s not quite right.” My pharma mentor called it “The Sniff Test” – if it smells like shit, it probably is. It’s an important skill for a scientist to have. And then there are just those that, for whatever reason, are wired in such a way that they eschew the logical evidence in front of them, and go towards the full-tilt, balls to the wall crazy. And that’s what I have for you today. Crazy. 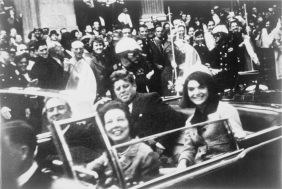 On November 22nd, 1963, President John Fitzgerald Kennedy was assassinated while in his motorcade in Dallas, Texas. The sequence of events was captured on video by Abraham Zapruder, in what is known as “the Zapruder film.” In it we see President Kennedy grabbing his throat and leaning forward slightly for approximately 8 seconds, followed by a massive, and fatal, head wound. It is generally agreed that the fatal wound came by way of a high-powered rifle. A bullet wound in his back with an exit wound in is neck generally explains why he grasped his throat. That same bullet also seriously injured Texas Governor John Connally.

At odds are whether there were three shots or four. One gunman or two. Whether Lee Harvey Oswald was the assassin at all, or just a patsy. Was the hit pulled off by Oswald alone, or was it done by the Mafia, CIA, Russia or some U.S. government agency? Was the  Zapruder film altered? Was it faked? Conspiracy theories abound, and I’m sure we’ve all seen our fair share of them. But while hoarding papers, I stumbled across something I thought I would never see: JFK was killed by a poison arrow.

You read that right. In an article published in the journal “Medical Hypotheses”, a peer-reviewed journal that is really more an outlet or forum for medical and scientific ideas, it was hypothesized that JFK was killed by a poisoned arrow (1). His proof was that:

It’s really hard to fathom, isn’t it? Or is it? No it really is. I won’t get into the wound or the autopsy, that’s not my thing. But the rest I’ll dive into.

Could an organization, like the CIA, have the means to deliver a neurotoxin-laced dart or arrow? Yes. Really? Yes, really. The CIA had programs (presumably at the time of the JFK assassination) in which it stored massive quantities of saxitoxin, a potent neurotoxin, and devices to deliver it. In a Select Committee to Study Governmental Operations with Respect to Intelligence Activities, there was an emphasis on unauthorized storage of toxic agents. During the meeting it was disclosed that the CIA had accumulated, at great expense, 11 grams of saxitoxin (see exhibits 2 and 3). There was also the discussion of a device to deliver poisoned darts:

CHAIRMAN. Have you brought with you some of those devices which would have enabled the CIA to use this poison (saxitoxin) for killing people?
COLBY. We have, indeed.
CHAIRMAN. Does this pistol fire the dart ?
COLBY. Yes, it does, Mr. Chairman. The round thing at the top is obviously the sight, the rest of it is what is practically a normal .45, although it is, a special. However, it works by electricity. There is a battery in the handle, and it fires a small dart.
CHAIRMAN. So that when it fires, it fires silently?
COLBY. Almost silently, yes.
CHAIRMAN. What range does it have?
COLBY. One hundred meters, I believe, about 100 yards, 100 meters. 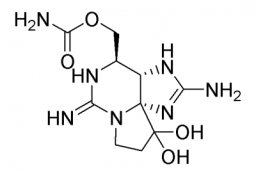 I’m not into weapons that much, but a battery powered .45 that silently fires poisoned darts is pretty cool, I have to admit. Make it a Walther PPK and it’s very 007. The next question is: could a dart deliver enough saxitoxin to kill a person? Probably. Saxitoxin is one of the most potent neurotoxins known. The estimated dose to kill a person if consumed orally, like with red-tide tainted shellfish is around 0.5 mg. The amount if given intravenously or intramuscularly is much less, around 0.05 mg. You can barely see that amount. So the accumulation of 11 grams – 11,000 mg – is enough kill more than 20,000 by oral administration or more than 200,000 if delivered intravenously. That’s actually quite scary.

And we know from reading my previous article on saxitoxin, that it blocks sodium-channels and  prevents the formation of action potentials in nerves and muscle fibers, leading to paralysis. Does it work instantly? I’ve never tried it myself, but I’m going to say no. Neurotoxins work very quickly, but instantly, so that President Kennedy could only clench his throat and do no more? Not likely.

The likely scenario is the most obvious: he was shot in the upper back with the bullet exiting his throat. He grabbed the wound and was in an instant state of shock. Who wouldn’t be? No one there, save for one or two, knew this would, or even could, happen. Eight seconds ticked by before the fatal head wound. According to the author, this fatal head wound was to “cover up” the death due to saxitoxin. Well, you’re not going to die by asphyxiation (respiratory paralysis), which is what happens with saxitoxin, in 8 seconds. And seriously, if you have the means to shoot someone in the head, would you really go through the trouble of poisoning them first? With some super-secret silent dart firing .45 or other device? Of course not. That would be a crazy idea. Just skip the middle-man and go with the sniper in the book depository.

Now normally I wouldn’t call someone crazy. But in this case it might be true. The author of the paper is one Dr. Alen Salerian, a former psychiatrist to the stars. He was brilliant. He was eccentric. He wanted fame.

His downfall started when Robert Hanssen was arrested for being an FBI double-agent for the Russians in 2001. It was one of the greatest security breaches in the FBI’s history. Dr. Salerian managed to offer his services to Hanssen’s defense attorney, and spoke at length with Hanssen, but wound up breaching doctor-patient confidentiality to the media on multiple occasions, revealing Hanssen’s secrets and sexual proclivities. His intent was to be the star of the show, despite his moral obligations. He lost his academic, pharmaceutical and hospital ties, but in the end he kept his medical license, was suspended for two years, and received a few fines.

But most disturbingly he was indicted by a Federal Grand Jury for illegally dispensing prescription drugs, including oxycodone, in 2013. He faced 144 counts, but was found unfit to stand trial, despite his own objections. And as far as I know, he is currently in a Federal Medical Center not far from where I live (read: prison mental hospital). Such a sad and bizarre end to what was once a prominent and influential medical doctor.

His “hypothesis” on the poison arrow assisted homicide of JFK never should have been published in the first place, given his prior track record with the Hanssen case. If you’re one for second chances, then sure, publish it. But for goodness sake, edit the damned thing. He references his figures incorrectly in the text, he writes that the “study” is in four parts, then proceeds to label them “Part 1”, “Part 2,” and “Part III” – mixing Arabic numerals with Roman – and ignoring Part 4. Or Part IV. Whatever.

In short, the “paper” is a mess, but it is just a reminder that there is a conspiracy theory for everything. And even if it does have merit, it often gets lost in the crazy. I love this stuff.

Note: if you want a bit more, you can read up on the “Umbrella Man”.

9 thoughts on “The JFK Assassination: A Book Depository, a Sniper . . . and a Poison Arrow?”