On every street corner in America there resides a Starbucks.  On the counter of every gas station there lives an energy drink display.  In every pharmacy there is a No-Doz section.  Mountain Dew by the caseload in gamers’ basements.  Coke and Pepsi in a cage match.

What’s the common denominator here?  Caffeine.  And lots of it.  But surely something so good can’t be bad for us, right?  It’s from the earth.  We need this.  Are we wrong?  My Magic-8 ball says “without a doubt.”  Glad we cleared that up.

So lets focus on a natural source of caffeine – the coffee bean. 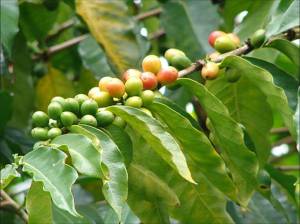 Coffee beans are the seeds from the genus Coffea, a flowering plant that most likely originated in the Ethiopian Plateau and is now grown worldwide.  Legend has it that a goat herder observed his goats eating berries from a tree, and became so wired that they could not sleep at night.  Word spread, and soon coffee houses sprung up everywhere.  The popular public places were hubs for gathering, socializing, listening to music and sharing information.  Sound familiar?  They were they 16th century version of Starbucks.  By the 17th century, coffee made its way to Europe with mixed reviews.  In 1615, the local clergy of Venice condemned the “bitter invention of Satan,” presumably because it was so well liked by Muslims.  When Pope Clement VIII was asked to intervene, he took one sip of the magical elixir and declared that we should  “cheat the devil by baptizing it.”  By the mid-17th century there were over 300 coffee houses in London.  By comparison, 400 years later, there are over 1500 in London.  As with just about everything, Coffea made its way to the New World, and thrived in Central and South America.  Today, coffee is one of the most valuable and highly traded crop commodities.

The success of coffee (and colas, but I’ll save that for another time – it’s fascinating) is due in no small part to caffeine.  So just what is caffeine?

Caffeine is a xanthoid alkaloid, and like most alkaloids is bitter in taste.  It is present in the seeds (like coffee beans) and leaves (like tea leaves) of some plants.  The caffeine itself is a defense mechanism against herbivores.  The goal of any species is to get its genetic material into the gene pool, and a small mammal or insect munching on the seeds of Coffea could be paralyzed or killed – or up ’til 3 a.m. playing Call of Duty.  It works by antagonizing the effects of adenosine, a purine nucleoside that supresses activity in the central nervous system.  Caffeine thus stimulates the neurotransmission of acetylcholine, dopamine, and epinephrine.  In short, caffeine increases sensory perceptions and sustains attention (acetylcholine), increases motor control and arousal (dopamine), and increases heart rate (epinephrine).  We call these types of drugs stimulants.

I can hear it already . . . “and the downside is?”  Well, I ended the last paragraph with the words “drug” and “stimulant.”  What does that bring to mind?  For me, other stimulants such as methamphetamine, cocaine, MDMA (Ecstasy), and the cathinones known as “bath salts.”

In 2010, Michael Bedford of the UK purchased pure caffeine powder.  Despite the warning that only 1/16th of a teaspoon be used, he consumed two spoonfuls while at a party.  He then became ill, started slurring his words, vomited, and collapsed.  He made it to a hospital where he received supportive care, but later died.  His blood concentration of caffeine was 251 mg/L, enough to kill several adults.

Caffeine powder and concentrated caffeine additives are widely available online.  The issue, as with most poisons, is education and dosage.  The common perception is “if it is available online or in a store, it must be safe.”  I encounter this line of thinking often in my line of work.  One can buy a 32 ounce additive made to make anything into an energy drink.  It contains 16,000 milligrams of caffeine.  If taken straight, enough to kill three people.

An overdose of caffeine increases the heart rate and blood pressure, and people can develop tremors and restlessness.  These symptoms are a sign of caffeine toxicity, and if the source is coffee, one can put the coffee pot down and be OK.  But when taken in a concentrated form, you don’t have that option.  It’s too late.  Emergency medical care is the only option, and like the case of Mr. Bedford, not enough.

Now, I’m not suggesting we criminalize caffeine, there would be riots in the streets, rather just bringing some attention to another one of Nature’s Poisons.  And remember, the dose makes the poison!

13 thoughts on “Caffeine: Addicted to Poison”