One of Nature’s most intriguing poisons, to me at least, is scopolamine.  Where else can you find a natural product with such a colorful history?  Scopolamine has its roots in witchcraft, zombies, crime, murder, and a top-secret CIA program.  Seriously, how can one not love this stuff?  If any drug could be called evil, this would be it.  But it does have a bright side.  Scopolamine has been used for sedation during childbirth and is still in use today for the treatment of motion sickness.  But those things aren’t interesting.  I want to know about CIA zombie witches.  Unfortunately, there isn’t enough time or space in a single post to detail the sordid history of scopolamine that makes it so fascinating – I’ll write more on it later, I promise – so for now we’ll start at the beginning.

Scopolamine is an alkaloid that comes from many members of the Solanaceae family of plants.  The Solanaceae family is commonly referred to as “nightshade”, and it’s a huge family.  In it you’ve got the genus Solanum (potato and tomato), Capsicum (peppers), Physalis (tomatillos), and Nicotiana (tobacco), to name just a few.  Now, there’s no scopolamine in your tomato sandwich, but there is in the Hyoscyamus genus, a collection of eleven species known collectively as the henbanes. 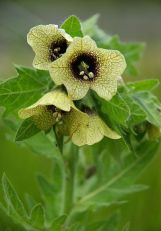 One of the most familiar henbanes is Hyoscyamus niger, also known as  black henbane or stinking nightshade.  Originally from the Mediterranean area, henbane spread into Northern Africa, Asia, the Middle East, and eventually, Europe.  We probably have the Spaniards to thank for introducing it to the Americas.  Gracias.   It is described by many as a filthy plant, with dirty-yellow bell shaped flowers, that looks and smells like death.  I’ve never seen it myself, but it had me at filthy (one of my favorite words).  If I do grow it or see it in person, I’ll update this section.  From the pictures I’ve seen though, it doesn’t look so bad (but if you’ve ever house hunted online, you know that photos can be deceiving).  It is an annual that can grow up to three feet tall, with heavily scented leaves.  It grows in the crappiest of soils and conditions, and is often found along roadsides, pastures, and waste facilities.  Cemeteries are rumored to be a favorite growing spot of henbane, which no doubt propagates its evil reputation.

In ancient Greek history, it was sacred to the god Apollo (not Richard Hatch, if you’re a BSG fan – I told you I’m geeky).  Followers of Apollo would burn henbane and its seeds at his temples and reach a state in which the mind was subdued, allowing the practitioner access to the divine.  Much later, Pliny the elder wrote of its spirit-altering properties “it is certainly known, that if one takes of it in a drink more than four leaves, it will put him beside himself.”  In the middle ages henbane was used in “flying ointments”, that would be used by witches to achieve a state of altered consciousness.  They would slather the fat-based ointment on a broomstick and ride it naked (get your minds out of the gutter), all the while having an out of body hallucinogenic experience.  So now you know how the witch flying a broomstick archetype came about.

So what’s behind these out of body experiences?  It’s one of Nature’s Poisons, scopolamine, in case the title of this post didn’t clue you in.  So the next question is, what the heck is scopolamine?  For starters, it’s a tropane – a nitrogen containing bicyclic compound. Other notable tropanes include atropine and cocaine.  Scopolamine is a muscarinic receptor antagonist that blocks the actions of acetylcholine in the parasympathetic nervous system.  Most have heard the phrase “fight or flight” in reference to the sympathetic nervous system.  The parasympathetic nervous system uses the catch phrase “rest and digest,”  the bodily activities after eating and at rest: defecation, urination and salivation.  Used in small doses, scopolamine can be used to suppress these processes that are out of our control.  One such product is a patch called Transderm Scop, and is used to treat motion sickness and nausea.  These patches deliver 1.5 mg over three days.  For comparison, a grain of rice has a mass of about 20 mg.  So these are what legit doses and uses are like.  What happens if we channel our inner Emeril Legasse and “kick it up a notch?”

At higher doses scopolamine acts further on the CNS, specifically the temporal lobe, and impairs memory.  But that’s not exactly correct.  It doesn’t just impair memory, but can cause memories to never be formed.  Think people have come up with some nefarious uses for scopolamine?  You’d be right.  At high doses it also acts as a deliriant, a subset of hallucinogens.  Deliriants are characterized by extreme confusion and the inability to control ones actions, all the while having extreme, vivid, and realistic hallucinations as your brain struggles to interpret its surrounding stimuli.  Overdoses can lead to extreme psychosis and insanity.  Think this is just hyperbole?  Read on about a young man who took seven scopolamine pills (probably 3.5 mg) [from Erowid (1)]:

” They drove me down [to the hospital] and apparently the whole way there I thought we were riding some type of laser train, but I really don’t recall anything of the sort. When I got there I got really violent with the nurses so they strapped me to the bed and the first 24 hours after being admitted to intensive care I can’t remember at all, the next two days I remember vividly accompanied with memories of outrageous things like talking snakes calling me names (the serious delirium began to subside after about four days).”

I can’t imagine four days of that.  And this young man was admitted to the ICU.  It’s safe to say that without supportive care, this man would have died.  Then there’s this man who ingested and injected scopolamine, from Erowid (2):

“The fire department came and took me to the ER . . . It was funny cause I would go from a clear mind to talking to people who were not there. They shot me with valium 3 times to no effect. My heart rate was over 200 and my mouth so dry I could not talk [remember the salivation part earlier?].

The cops came . . . I kept seeing a detective shove his handgun into the cell and pull the trigger. “Click” but no shot. He would laugh and pull his hand out. This happened over and over. Then I saw my grandma get thrown into the bull pen right across the hall. I saw the thugs rape her over and over . . . All the time I was in the padded cell I thought I saw pills all over the floor. I kept eating the pills hoping to come down. I thought there was a bowl of valiums in the middle. It was really the crap hole in the rubber room. Gross.

Over the next 12 hours my toilet was singing do-wop, my towel was Popeye’s kid Sweetpea swinging around the bars, and I was stuck in a standoff between the Hells Angels and the Black Panthers.

The third night I was afraid to move because I would set off a war and I was right in the line of fire. I lay frozen for at least 10 hours. The Black Panthers kept throwing dead cats into my cell . . . The fourth morning I had to go to court so Mental Health interviewed me. I denied taking any illicit drug, knew who was president, what day it was, and where I was. I told them everything was fine ‘cept they keep throwing dead cats into my cell.”

So these overdoses are four day trainwrecks.  Laser beams, talking snakes, singing toilets, eating from the crapper, and dead cats.  Good times, good times.  So we can see that 0.5 mg is OK (1.5 mg/3 days), but 3.5 mg leads to disaster.  And that’s the problem with plant based poisons.  You never know what dose you are getting.  Scopolamine is present in every part of henbane, from the roots right up to the seeds.  Scopolamine concentrations can vary widely depending upon species, location, soil type, water type, and a myriad of other variables.

As an example, one set of researchers in Iran found the following amounts of scopolamine in various 1 gram dried and ground Hyoscyamus niger parts (3):

That’s a ton of scopolamine.  Granted, it’s extracted in a lab by chemists that know what they are doing, but it’s easy to see that ingesting any part of henbane can have deleterious effects, let alone steeping it in a tea or preparing a topical formulation.  This is just another example of one of Nature’s Poisons, and why we should take them seriously and treat them with respect.  There’s more to come on this drug in the future.  It’s too cool to mention just once.

8 thoughts on “Scopolamine: As Evil as it Wants to Be”