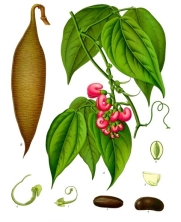 I find it cool when a poison has a literal killer history, yet finds use in hospitals around the world as a valuable medicine.  That’s the story of physostigmine, an alkaloid found in Physostigma venenosum, the Calabar bean, and where we will start this tale.

The Calabar bean is no doubt named for the area in which it was first described, the Calabar region and river delta in what is now Nigeria.  Its first description was by William Freeman Daniell, an English physician and botanist, in 1846.  He described a bean being used as a poison in an ordeal.  Simply, an ordeal is just a “test” to determine an individual’s guilt or innocence.  The beans were crushed and soaked in water, and the prisoner made to drink the elexir.  If he died, he was guilty.  Justice served.  If he vomited and lived, he was innocent and set free.  No hard feelings, Bro. (1)

Sound harsh?  It’s not as bad as colonial American ordeals.  Then, suspected witches were bound with rope in a fetal position and tossed into a lake.  If they sank and drowned, they were innocent.  If they floated, they were hauled out of the water, then killed.  Because everyone knows witches float.  There is something similar involving fire, and where we get the expression “trial by fire.”

The source of the Calabar bean, Physostigma venenosum, is a climbing, perennial legume.  It can reach heights of up to 50 feet, and puts out long seed pods holding 2 to 3 seeds.  And it is theses seeds that hold the chemical used as the previously mentioned ordeal poison: physostigmine.

Now obviously physostigmine can not decide one’s guilt or innocence, we’ll leave that up to truth serum.  But what it can do is act as a parasympathomimetic drug, or the easier-to-say cholinergic drug.  Physostigmine works on the parasympathetic nervous system (PNS) by inhibiting the enzyme cholinesterase, thus increasing acetylcholine.  The PNS is the part of our nervous system that is responsible for the so-called “rest-and-digest” activities.  There are many mnemonics to remember these activities, and the one I use is SLUD: Salivation, Lacrimation, Urination, and Digestion.

So if one were to be poisoned by an anticholinergic drug, say scopolamine (how convenient that I’ve written about that before), they would be plagued by the symptoms one would suspect of a drug working against the PNS.  Mild symptoms would be dry mouth, urinary retention, and inability to poo – just what you would expect of something working against SLUD – and more advanced symptoms would include confusion, agitation, and seizures (MDs would call it myoclonic jerking.  Who comes up with that?).  Need an antidote, and fast?  Try a calabar bean!  That might work at Hogwarts, because for some reason I always think of a calabar bean like a bezoar.  If you have no idea what I’m talking about, please excuse my geekiness.  Anyways, your ED doctor hopefully isn’t going to pull a magic bean out of his pocket, but he is likely to give you a dose of physostigmine.

And this is exactly what happened when a 15 year old girl ingested Jimson weed, Datura stramonium, a plant that contains the anticholinergic drugs atropine and scopolamine, and often used for its hallucinogenic effects.  She presented to a Toronto ED with tachycardia, mydriasis (dilated pupils), and a generally “out of it” state.  The common course of treatment, benzodiazepines, did not help, and it was at the suggestion of the local Poison Control Center that they tried physostigmine – with success of course (2).

So that’s recent times, but what about in ye olden days?  Well, it was studied back then, too.  The properties and physiological actions of the Calabar bean were studied in the 1860’s (3).  And remember the part about physostigmine working on seizures?  It worked on those back then, too.  Only in these cases, they were used to treat tetanus – a condition caused by a bacterial neurotoxin and causes muscle spasms as well as “lockjaw.”  We don’t worry so much about this now, as we get tetanus shots – well, probably not the antivaxers – but in the 1800’s it was a big deal.  The spasms and seizures caused by tetanus could often be severe, and were successfully treated by extracts of Physostigma (4, 5).  One doctor went so far to write (6):

“So many cases have been successfully treated within these few years by means of the Calabar bean, that I think it should be preferred in the treatment of this dangerous malady to any of those empirical remedies formerly recommended.”

That’s my kind of doctor: “Screw what y’all think works, I’ll just stick with my magic beans.” And perhaps things haven’t changed that much, or at least maybe they shouldn’t.  Physostigmine is probably underused when patients present with anticholinergic syndromes.  The “standard” (for seemingly everything) is to load them up with benzodiazepines, but outcomes may actually be better with physostigmine (7).  Physostigmine is probably underutilized because doctors are not as familiar with it, but it should be investigated when presented with a patient with anticholinergic seizures that do not respond to benzodiazepines, and run the risk of being over-sedated (8).  This is why having a good medical toxicologist on staff is important.

And I would be remiss if I, as a synthetic organic chemist turned toxicologist, did not mention that the first synthesis of physostigmine was accomplished by Dr. Percy Julian in 1935 (9).  As an African-American attending school in the 1920′s  Dr. Julian faced incredible odds and discrimination in his quest to earn his doctorate, which he finally earned in Vienna, Austria in 1931.  But apart from his work with physostigmine, he is probably more well known for his work on steroids.  I come from the Carl Djerassi chemistry tree, and Djerassi and Julian were “rivals” in the steroid game during the 40′s and 50′s.  Dr. Julian’s body of work ranks him not only as an inspiration to scientists everywhere, but as a Titan.

So there you go, the description of the Calabar bean and its use as an ordeal poison all the way up to a life saving drug.  Pretty cool stuff.  But it’s not entirely unique, as there are poisonous histories behind many old and new medicines, and I’ll get to those in due time.

8 thoughts on “Physostigmine: From Ordeal Poison to Valuable Medicine”