Durham Athletic Park by Justin Brower. The old home of the Durham Bulls and location of the movie “Bull Durham.”

When I moved to North Carolina 7 years ago I didn’t think much about one of the bedrocks of the North Carolina economy: Tobacco. It’s a business dying a slow death, and one only has to look at the closed-up buildings that once housed powerful tobacco conglomerates, such as Liggett and Myers, in downtown Durham. Perhaps the last connection to tobacco in Durham is the minor league baseball team the Durham Bulls. Yes, the team that back-dropped the classic baseball movie Bull Durham really does exist. Formed in 1902, the team was first called the Durham Tobacconists, then upon realization that the name was stupid, changed it to the Durham Bulls. At the time, Bull Durham tobacco, based in Durham, was among the most popular brands in America, so the new team name was a natural fit. Ironically, Bull Durham tobacco closed up shop less than two months after the release of Bull Durham the movie. Coincidence? I think not. So feel free to blame Kevin Costner for the demise of Bull Durham Tobacco and the $200 million debacle that was Waterworld.

But I did say dying, not dead. Tobacco is still an important part of North Carolina economy, bringing in a farm income just under $1 billion and a total economic impact to the state of over $7 billion. It’s difficult to drive outside a city in central North Carolina in the summertime and not see a tobacco field. Overall there are almost 200,000 acres of tobacco, producing 451 millions pounds – the most in the United States.

But this isn’t about baseball, economics, or even the economics of baseball, rather this is about a potent stimulant found in tobacco: the alkaloid nicotine. I’ve written about nicotine before, in a post outlining the dangers of liquid nicotine in e-cigarettes and in a fun piece on the poisoning of King Joffrey in Game of Thrones, but today’s post takes a decidedly more somber turn.

Green tobacco sickness (GTS) is an acute occupational poisoning due to nicotine. All workers that cultivate and harvest tobacco plants are susceptible, with an estimated 25-50% of workers reporting GTS (the number experiencing is no doubt higher). Common symptoms of GTS are: nausea, vomiting, abdominal pain, dizziness, sweating and shortness of breath, and will resolve itself in a few unpleasant days and sleepless nights. Are these workers rolling up tobacco joints in the field? Making their own snuff or chewing tobacco? No. They’re being poisoned through their skin while doing their jobs. 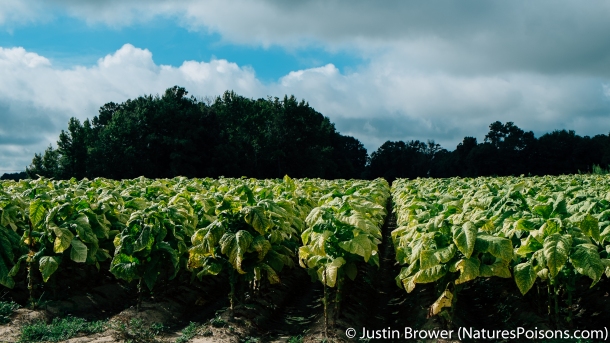 Nicotine can be absorbed through the skin, which comes as no surprise to anyone since we see transdermal nicotine patches for smoking cessation all over the place. In the field, nicotine absorption is facilitated when the large tobacco leaves are wet, like after a rain or on a wet, dewy morning that is so prevalent here in the South. Not only do their hands become covered with gummy, nicotine sap, but their clothing becomes saturated, it gets in their hair, and spreads even more when they sweat. You no doubt remember that sweating is a symptom of nicotine toxicity, making matters even worse – if not, read the box below for a review.

In small doses, nicotine is well known to be a stimulant, causing the release of neurotransmitters and hormones, such as: acetylcholine, epinephrine, norepinephrine, serotonin, dopamine, vasopressin and endorphins. These are the chemicals responsible for the stimulation, arousal and  anxiolytic properties of nicotine. In large, toxic concentrations, however, nicotine brings about other, less desirable effects.

Nicotine is an agonist of the nicotinic acetylcholine receptor (nAChRs), with primary action on the parasympathetic nervous system (PNS). Nicotinic acetylcholine receptors are ligand-gated ion channels found not only in the PNS, but also in the central nervous system (CNS) and skeletal muscle, with affinity for acetylcholine and nicotine. When bound with an agonist, such as nicotine, the “open” state of the ion-channel is stabilized, allowing cations like potassium, sodium, and calcium to flow freely. When stimulated, the PNS is responsible for the so-called “rest and digest” and “feed and breed” actions. An easy way to remember the pathological effects is through the mnemonic SLUDGE: Salivation, Lacrimation, Urination, Defecation (or sometimes seen as Diaphoresis, aka sweating), GI upset, and Emesis. At very high, and lethal doses, the CNS and skeletal muscle effects kick in, resulting in a curare-like paralysis of the diaphragm and death. It’s not pretty. Ask King Joffrey about it.

Can GTS be prevented? Sure. Workers are advised to wear thick, impermeable gloves and rain suits. You ever worked hard outside in North Carolina, in the summer, when it’s 95 degrees with 95% humidity? I have. It’s not pleasant. To do so in a rain suit, or covered in a large garbage bag, or with thick rubber gloves would be insane. You would die of heat stroke. More practical controls are frequent hand washing and changing clothing throughout the day. In fact, hand washing stations in farm fields are required by the U.S. Occupational Safety and Health Administration (OSHA), but whether or not they actually exist, or if small farms are exempt, is unknown to me.

I don’t use this platform to preach, nor do I consider myself a Social Justice Warrior, but I do believe that everyone should have a safe working environment and be treated fairly, no matter their race, sex, creed, religion, or socioeconomic status. What does this rant have to do with GTS? Everything.

The vast majority of farm hands in tobacco fields are migrant workers, primarily Mexican. Most are poor, undereducated, non-english speaking men that are working in a tobacco field for the first time – it seems like the turn-over rate is pretty high in tobacco fields, and once you do it, you’re like “F*** this s***!” There are two duties in the field in which the risk for GTS is high: topping and harvesting. In topping, the flower is snapped off by hand to promote root and leaf growth. To do this workers walk down the rows, constantly brushing up against tobacco leaves. During harvesting, workers walk down each row and snap leaves from the stalk one at a time, carrying the leaves between their free arm and chest (you can see the plucked stalks in the tobacco field photo, above). In either job, workers are constantly in contact with tobacco leaves, and the risk of GTS is high.

So why put up with it? Why not quit or take a stand? If you own the farm, or are related to the owner, you may be able to take a day or two off, but migrant workers aren’t afforded that luxury. If they don’t work, they don’t get paid. There is also the fear that they could lose their job, further impoverishing their family, or retaliation for speaking up about the poor working conditions. Not working could also affect their H-2A temporary worker status – yes, not every Mexican worker is an “illegal.” All of this sickness and worry over something that we all know is bad for us anyways. Mind boggling.

Maybe you don’t feel bad for grown-ass men and women doing a job that makes them sick. I can understand where you are coming from. What about children? Children aren’t immune to nicotine and GTS, in fact, they are even more likely to experience nicotine toxicity due to their smaller size and total body surface area. Imagine teenagers, or younger, working 12-hour shifts in all weather conditions. For an excellent news story and expose on the practice of child labor in NC tobacco farms, please read this New York Times article.

You’re probably wondering about the legality of employing children to work on farms, so here are the age standards:

Since harvest is in the late summer, when school is out, the caveat of “outside of school hours” doesn’t apply. Additionally small farms with under “500 man-days” of labor are exempt from federal minimum wage, meaning they can employ children at any age, and pay them any hourly rate. Nice. It’s probably a good time to point out that most tobacco farms in NC are small, and average around 8 acres, so many of these operations could be exempt.

I’ll jump off my soapbox now, as the point of this post is really just to highlight another route of nicotine toxicity and bring your attention to GTS. Our dependence on nicotine and tobacco, though declining, isn’t going anywhere, and with it being financially prohibitive to synthetically produce nicotine for devices like e-cigarettes, GTS, afflicting adults and children alike, is here to stay.

5 thoughts on “Green Tobacco Sickness: The Plight of Tobacco Harvesters”