Plant poisonings are a funny thing. Most people aren’t actively seeking out poisonous plants in which to eat, that would be dumb. Rather they mistake them for something else through an honest mistake, willful ignorance, or just plain foraging hubris. I hate foraging hubris. But I digress.

Take the “Death Camas.” I’d like to believe that no sane person would willfully eat something with the name “death” in it, but accidents happen. The Death Camas, of many varieties, used to belong solely to the Zigadenus genus, with about twenty different species. But botanists being botanists decided that wasn’t good enough, and blew the genus up. Now, the Death Camas’ are spread among the Anticlea, Stenanthium, and Toxicoscordion genus, with just one species, Zigadenus glaberrimus, left in the original.  I find this all so confusing, which is probably the number one reason why I’m not a botanist. But it also makes the literature confusing when the old an new taxonomies collide. So to keep things clear, but draw the ire of botanists the world over, I’ll just refer to them all as Zigadenus. 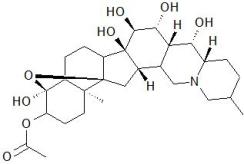 The Death Camas are flowering plants that are native throughout the United States and generally reach several feet in height. The flowers grow as panicles – a cluster of flowers – that can (kinda) resemble those of onions (Allium). Making matters worse, both have bulbs, which is unfortunate because the Death Camas are highly poisonous. All parts of the plants, from the leaves to the bulbs, contain zygacine, a steroidal toxin that binds to sodium channels, prolonging their activation. This decrease in excitability can lead to cardiac and neurotoxicity. Faithful readers will remember that this “open” state not only causes varying degrees of paralysis, but an increase in calcium, which in turn stimulates the release of acetylcholine and very bad things. An increase in acetylcholine can cause the cholinergic toxidrome remembered by the acronym we all know and love, SLUDGE: Salivation, Lacrimation, Urination, Defecation, GI upset, and Emesis. If this type of poisoning sounds familiar, it’s because it is similar to that of the grayanotoxins and “mad honey.”

[edit: The “Death Camas” can also be confused with “Common Camas”, but of a different family, which has historically been an important food source for northwestern Native Americans. Thanks to Tom McKenzie bringing it up.] 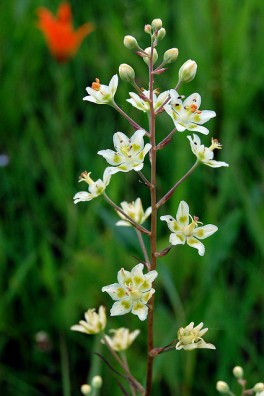 Most reported poisonings occur with livestock, which is to be expected of grazing animals, but human poisonings are not exactly rare either. In the western United States, the Lewis and Clark expedition encountered a poisonous bulb that may have been Zigadenus, and in a turn-of the-tables, early Mormon settlers in Utah were poisoned by Native Americans selling the plants as food (1). The knowledge of properly identifying Zigadenus though has not been passed down to all Native Americans, however. In 1994 a 50-year old Navajo man dug up and ate what he thought were wild onions while hiking with his daughters. An hour after ingestion he experienced ataxia (a loss of voluntary muscle movement and uncoordination), nausea, and vomiting. On admittance to the emergency department  his blood pressure was a low, 80/50 mmHg, and he was given IV fluids and his cardiac functions monitored. His family retrieved the “wild onions”, which were later confirmed to be Zigadenus. Generally, those that are poisoned receive standard supportive care, and recover after a few days, like our gentleman here (2).

While there is no traditional “antidote” for zygacine poisoning, one reported case study successfully treated the resulting bradycardia (heart rate <60 beats per minute) with atropine, and hypotension (low blood pressure) with dopamine (3). The use of atropine in this case is interesting, because while also increasing resting heart rate, it is an anticholinergic drug, much like scopalamine that you’ve read about here and here. As such it counters the dreaded and messy SLUDGE, and while not typically used in such a manner, may help resolve some of the poisoning symptoms. Other “traditional” treatments for poisoning are discouraged, such as gastric lavage, which is a dying breed these days anyways, and activated charcoal due to risk of aspiration in a vomiting individual (3).

So be careful, as deaths have occurred, and like always, never eat anything unless you are 100% certain of what it is. Especially if it’s called “death” anything. And if you do know of something that we eat that has “death” in it, leave a comment!