Ackee is a tropical fruit native to West Africa, where it is known as akye, but it is legendary in Jamaica.  Brought to the Caribbeans in the 18th century, it is the National Fruit of Jamaica and one half of Jamaica’s signature dish, ackee and saltfish.  Ackee is a member of the Sapindaceae family, an extensive family also referred to as soapberry.  Species within this family include the tropical fruits lychee, longan, and guarana, and an additional 2000 others.  But none of these have a history quite like the ackee, and it starts with its scientific name.  The ackee, Blighia sapida, is named after the individual who brought specimens from the Caribbean to the famed Kew Gardens in London in 1793, one Captain William Bligh of “Mutiny on the Bounty” lore.  [This fact was confirmed to me by one of Kew Gardens excellent Librarians.  Thank you very much.] 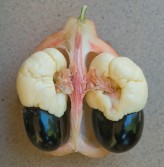 In Jamaica, and other islands throughout the Caribbean, the ackee fruit grows on evergreen trees that can reach 50 feet tall (~15 meters).  The fruit itself are pods, grown in clusters, that ripen from green to red, and are harvested when the pod splits open.  Once open and mature, the seeds, numbering from three to five, are clearly visible.  Not all of the fruit is edible, though.  Only the fleshy arilli covering the massive black seeds are used.  The seed pod and seed are discarded.  The arilli are tender, so they are typically added to the dish last, and cooked through when the cream colored ackee turns yellow.

A typical recipe for ackee and saltfish, adapted from many on-line sources:

1/2 lb Saltfish
12 fresh ripe ackees** or 1 can, drained (read below for why)
1 onion, chopped
1 T of butter or oil
1  hot pepper (such as a fruity habanero)
1 bell pepper, chopped
1 tomato, chopped
fresh thyme
salt and pepper to taste

* Habanero may be removed if too hot, or diced up if not hot enough.
* note: US copyright does not protect recipes or directions, so copy away.
** Some pre-cook ackee by boiling in water for 5-20 minutes to a desired “doneness” and texture, while others do so and insist it is to “remove the toxins.” Read below, but ripe ackee contains little Hypogylcin, but boiling can remove up to 85% of it. If you’re in doubt about your ackee, either don’t use it at all, or boil it (discarding the water). See ref. 5 for more info.

So what’s so unusual about ackee, you might be thinking.  So far all I’ve described is a staple food with a rich history.  There’s got to be more to it than that, right?  Of course.  It just wouldn’t be Nature’s Poisons without some devious plot by Mother Nature.

If you’re in the United States, go look for some fresh ackee.  Go ahead, I’ll wait.  So unless you found some being sold by a shifty looking character behind the International Market, you struck out.  That’s because importation of ackee is banned by the FDA (1).  The ban even extends to most canned ackee products.  The only way to have it legally imported is by the manufacturer getting it “green listed” by the FDA, meaning that it has already been vetted as safe.

Safe?  As in it there is a probability of it being un-safe?  Most definitely.  Only it isn’t so much a probability, rather a surety.  You see, there’s this thing called Jamaican vomiting sickness (JVS), and it’s pretty self explanatory.  The illness starts within 2-12 hours of consuming unripe ackee, or its pods or seeds.  Symptoms include vomitting, loss of consciousness, and seizures.  Without immediate supportive care, death can result.  In a three month period of 2001 in Haiti there were 60 cases of poisoning due to ackee, resulting in 36 deaths (2).  So the threat is very real.

The chemical and poison behind JVS is hypoglycin, a nonproteinogenic amino acid, meaning that it is an unnatural amino acid and not found in our genetic code.  The name hypoglycin tells a bit about it.  It works its evil by lowering the victim’s blood sugar.  The exact mechanism is still unknown, but the prevailing theory is that it inhibits the carnitine-CoA transferase system, which in turn inhibits fatty-acid oxidation.  When this occurs, concentration of fats increase throughout the body, leading to an increased use of glucose and inevitable hypoglycemia (3). Supportive care and therapy includes managing the seizures , stabilizing blood sugar, replacing fluids, and sedation with benzodiazepines (such as lorazepam).

This is indeed a serious issue, and often afflicts the young who have not yet been taught that unripe ackee are poisonous.  Overall JVS affects hundreds per year in the Caribbean and west African nations.  But it is not just fresh, unripe fruit that poses a problem.  The FDA ban mentioned earlier includes canned ackee.  Hypoglycin is not destroyed during cooking or canning.  Processing unripe ackee is merely preparing death in a can.  The first reported illness in the United States came from canned ackee (4).  An individual of Jamaican descent living in Toledo, Ohio was sent a can of ackee by her sister in Toronto.  Two hours after cooking and consuming the ackee she fell ill with vomitting, and eventually made her way to an emergency department, where she received supportive care.  She recovered, but spent three days in the hospital.  All because of a can of fruit.

So while being a gorgeous specimen of fruit, a delicious staple food, the National Fruit of Jamaica, and part of Jamaica’s signature dish, it is quite deadly.  Off the top of my head I can’t think of another food that is so revered yet so poisonous.  If you know of any, leave a comment, e-mail, or hit me up on twitter @NaturesPoisons.