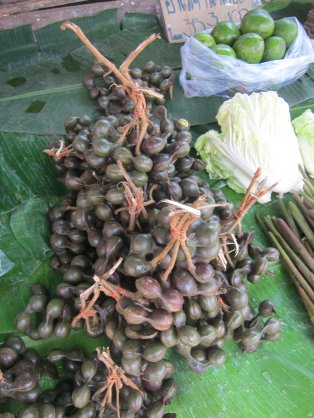 Since the dawn of time indigenous peoples have eaten what the land, and sea, has afforded them. Humankind has evolved and adapted so wonderfully to the foods around them, from whale blubber of the Siberian Eskimos to nopal cacti of ancient mesoamerican peoples. But what happens when your food wants to poison you? You eat it anyways, of course.

The djenkol tree, Archidendron jiringa, is a member of the Fabaceae family, which is commonly known as the peas and beans family. I’ve written about other Fabaceaes before, such as the Darling pea and drunken sheep and the fish killer Derris, so it’s not too much of a stretch to think that djenkol could be up to no good as well. Growing in large pods, the djenkol bean goes by many names – djenkol, jering, and da nyin thee, to name a few – and is an important food source and delicacy in Indonesia, Malaysia, Thailand, and Burma. They are sold throughout the year in open markets, and eaten raw, fried, or roasted. Opening or crushing the bean, however, emits a sulfurous odor. It’s faint, but definitely unpleasant. What’s even worse is that eating just one bean gives you the breath of rotten eggs. And then when nature calls, your urine smells equally bad, as a reminder of what you ate, in case you forgot. Did I mention it was a delicacy?

A foul stench isn’t enough to get the djenkol bean into Nature’s Poisons. To grace these hallowed pages you’ve got to inflict some pain. Do some damage. Kill with impunity. There might be some hyperbole here, but ingestion of djenkol beans can bring about a poisoning that was given its own name: Djenkolism, of course. Symptoms of djenkolism, which develop within hours, include nausea, vomiting, bilateral loin or flank pain, and hematuria – which is a fancy way of saying “blood in your pee.” All of the emergency room doctors are nodding their heads collectively and saying “oooooh, acute renal failure.” And they’re right, of course. The good news is that djenkolism will resolve itself in a few days, typically by increasing fluid intake and urine alkalinization (increasing the pH of the urine). And just how do you make your urine basic? Intravenous sodium bicarbonate (baking soda) is one course of action, but there are less invasive methods, too.

So why on earth would anyone eat djenkol beans, let alone regard them as a delicacy? That’s where it gets confusing. Not everyone that eats djenkol beans develops djenkolism. In fact, the vast majority of people don’t. But there doesn’t seem to be any confirmed rhyme or reason behind it.  A person that has never been afflicted before might find themselves in pain after a meal. Likewise a person that has experienced it many times before may eat them again and be symptom free. And development of djenkolism appears to be independent of cooking method, too. And it could come about from one bean. Or twenty. Call it “Djenkol roulette,” if you will.

The cause of all of this trouble is a simple, non-proteinogenic amino acid – meaning that this amino acid is not a part of our genetic cod- djenkolic acid, and is simply two cysteine amino acids linked by a methylene group. The metabolism to various sulfides is the cause of the foul smell, but that’s the least of your worries. Djenkolic acid is not soluble in acidic conditions, and precipitates as crystals, which physically irritate the urinary tract and renal (kidney) tubules. This is what causes the pain and bloody urine, but severe cases can progress from oliguria (low urine output) to anuria (no urine), and eventually to acute renal failure. In one case report a “tomato sauce sludge” was found after a ureteric stenting. Ewww. In this case, extreme hydration and alkalinization of the urine  to “flush out the sludge” did the trick.

Djenkol bean poisoning has undoubtedly been around for as long as they have been a culinary delight in Southeast Asia, but it took until 1930 for djenkolic acid to be discovered. And in an unusual twist*, djenkolic acid was first isolated from the urine of afflicted Java residents (I’m 99% certain they are called Javanese, but it looks funny, doesn’t it?). The dynamic duo of Drs. Van Veen and Hyman isolated small, sharp crystals from their urine, which also contained erythrocytes, epithelial cells, and proteins, symptoms of kidney disease and irritation. Correlating the crystals with the pathology, they isolated the same crystals from the djenkol bean and in a series of old-school structural elucidation, came up with djenkolic acid. In 1936 the first synthesis of djenkolic acid was achieved. Comparison with samples from Van Veen cemented the structure for good.

*Typically, chemicals are first isolated from their source, and then in human or animal biological specimens. The reason for this is the source is readily available, and the chemical can be isolated and studied in large amounts, making identification much, much easier. In biological specimens the amount of chemical or poison is much smaller, which can make detection and identification more difficult, even by today’s standards with modern instrumentation.

I have my own theory as to why some people develop djenkolism, while others don’t. The prevailing theory behind djenkolism is that djenkolic acid crystals, which form and thrive in acidic urine, lacerate renal tissue and cause obstructions. And remember that treatment is alkalinizing the urine. Normal urine pH is around 6.5-7.0, with it being a bit more acidic (lower pH) in the morning, and a bit more basic (higher pH) in the evening. Foods we eat also play a role in our urine pH. Foods that acidify our urine are: peas, beans, grains, meats, and alcohol. Foods that alkalize our urine are: most vegetables, fruits like berries and melons, and spices like chili powder and curry. So you could see that if someone had a recent diet of meat and alcohol, they may be more prone to developing djenkolic acid crystals. Whereas a family member dining on a sumptuous vegetarian curry, may not. At least that’s my theory, and I’m sticking to it.

My theory aside, I find it remarkable that people have learned from and adapted to the foods around them. As we’ve read before with the deadly and delicious ackee fruit and coconut crabs, not everything is 100% safe, and there was undoubtedly some trial and error going on while first taste testing these foods. Imagine the first person to eat an artichoke, it couldn’t have been a good experience, yet people kept at it. It’s the same thing with djenkol beans, but unlike artichokes, I may pass on the beans.

8 thoughts on “Of Djenkol Beans and Djenkolism: The Southeast Asian Delicacy that Poisons”