We all know the fable of the three little pigs. The first pig made their house from straw, the second made theirs out of sticks, and the smart one a humble abode of bricks. The Big Bad Wolf easily destroyed the first two homes – they were made of straw and sticks after all. But the third house? That dwelling was rock solid. The story ends in dramatic fashion with the wolf sliding down the chimney into a cauldron of boiling water, cooked into a stew, and eaten by the pigs. There are a couple lessons to be had, depending on whose point of view you look at. With regard to the wolf, it’s “don’t be a dick,” which coincidently is the first of two life lessons my mom passed onto me.* If we take a gander at the first two pigs, the lesson is “don’t be lazy, do work son.” But what if they weren’t lazy? What if they just took some construction shortcuts because they were hungry and wanted to eat? That’s the story I’ve got today: The Two Hungry Piggies.

*My mom, who died from breast cancer while I was in graduate school, passed onto me her two most important life lessons. I live by them and they serve me well. I’ve even passed them on to my three girls, with the addition of a third from your’s truly. Mom would be so proud. The lessons:

Our story starts with two pet miniature pigs, a 30 kg (66 lb) male and a 32 kg (70 lb) female. They were found trembling and with ataxia (lack of voluntary muscle movements), and rushed to the veterinary clinic. Both pigs had excessive salivation, foaming snouts, and rapid breathing and heart rates. Despite treatment with dipyrone (an old-school pain and muscle spasm reliever that is banned in the US and much of Europe for humans, but is still employed for veterinary use), antibiotics, and steroids, the male pig died. The female recovered in a few hours. (1) 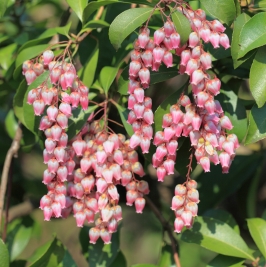 At necropsy – the examination of a corpse – the deceased pig was found to be normal, save for a segment of the duodenum filled with plant material. Careful examination of the contents showed it to be Japanese Andromeda (Pieris japonica), a flowery ornamental shrub newly planted in a garden accessible by the pigs, and obviously delicious looking. Since Pieris japonica is known to contain grayanotoxins, blood and tissue were analyzed. Except for the brain, all other tested specimens – blood, urine, bile, liver, kidney, lung, and muscle – contained grayanotoxin-I. The reported grayanotoxin-I concentrations were lower than those reported in other species, like humans and goats, but different species react differently to drugs due to differences in metabolism and receptors. This is why you should always take mice and rat drug studies with a grain of salt, we use rats because they’re cheap and plentiful, not because they’re good models of human activity.

Astute readers are already well aware of grayanotoxins and their role in “mad honey,” honey made from the nectar of grayanotoxin-containing rhododendrons and azaleas. Ingestion of grayanotoxin-poisoned honey can bring about sweating, salivation, nausea, and in high doses, cardiac effects, but is rarely fatal in humans. Grayanotoxins, of which there are four related structures, vary in concentration depending upon the plant species and exert their toxicity by interfering with voltage-gated sodium channels, much like the Queen of Poisons, aconitine. Cell membranes sustain a  membrane potential – a voltage difference of about -70 millivolts between the inside and outside of the cell. This voltage difference can fluctuate when sodium and chloride ions flow into the cell and potassium ions flow out via, you guessed it, sodium channels. Excitable cells, like neurons and muscle, use these action potentials for transmitting electrical signals throughout the body. This is how we feel pain and make our muscles contract. 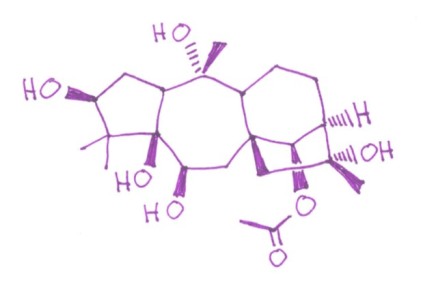 Grayanotoxins bind to the activated, open conformation of sodium channels, keeping it open and allowing an influx of sodium into the cell. There are several consequences here. The most obvious is there is no longer an action potential so we have a decrease in voluntary muscle control, which we saw in our pigs. Continued sodium channel activation also stimulates the central nervous system causing nausea, vomiting, and cardiovascular effects. Early symptoms, likely due to an increase in acetylcholine, include excessive salivation and perspiration, which was also observed in the pigs, and are often countered by the use of the anti-cholinergic atropine.

Our story of the two hungry little pigs has a sad ending, with the death of the male. The lesson to be learned here is to be careful what you plant in your yard, especially if you have grazing animals. Pet and livestock plant poisonings are much more numerous and common than human poisonings but often aren’t on people’s radar. I’m certain the owners of the miniature pigs wouldn’t have planted Japanese Andromeda in their yard if they knew it could harm their pets. If you are adding new plants and shrubs to your yard, and concerned about any harm to your pets, contact your local or state agricultural extension (at least in the U.S., I’m unaware of how other countries operate), it’s what they’re there for. And if you’re still in doubt, skip the shrubbery and just build them a house out of bricks. Better safe than sorry.

6 thoughts on “Grayanotoxin and the Two Hungry Piggies”