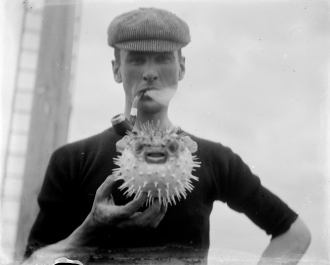 Take a look at this photo. Who couldn’t love this face? Really, who? Such a cute little fella. And I’m talking about the pufferfish, not the dude with the pipe. But I am thinking about taking up pipe smoking,  solely because of this photo. Relax, I won’t, that nicotine will kill you. But I’ll definitely pick up one of those sweet ass hats.

The first place I would wear said hat would be some swank Tokyo sushi bar where I could get my fill of fugu. What the f*** is fugu, you ask? That cute little fella in the photo. The fish, people, the fish. Stay focused. Fugu, the Japanese word for pufferfish, is the paper-thin sliced flesh of pufferfish primarily from the Takifugu genus. Raw fish usually isn’t all that exciting (unless you’re my kids who can’t get enough) but some people get a tingly feeling just thinking about fugu. It is considered a delicacy, and sushi chefs undergo years of apprenticeships learning the proper way to prepare fugu. On top of that there are written and practical exams, with a pass rate hovering around 40%.

With so much training and expertise involved, a plate of fugu can set me back as much as $200. So why the to-do over fugu? Simple. The element of danger. Properly prepared, thinly sliced fugu may give a slight tingling or numbing sensation on the mouth and tongue. What they are achieving is just a little bit of self-poisoning, not unlike Sir Arthur Conan Doyle – curiosity and poison is a dangerous combination. In most cases though, most diners experience no tingling, and end up eating sashimi tasting like gelatinous chicken.

The chemical responsible for the numbing effect is the chemical tetrodotoxin, a powerful and potent neurotoxin. We’ve talked about neurotoxins before, like with saxitoxin and red tides, and tetrodotoxin works in much the same way. Binding to the fast voltage-gated sodium channel (site 1 to be really specific), tetrodotoxin blocks its function. It imparts a conformational change that leaves the sodium-ion channel open longer, blocking conduction of nerve impulses and signalling between the body and the brain. This interference causes muscle paralysis throughout the body, from voluntary movement of your limbs, to involuntary movement of your diaphragm. And if you’re unable to breath, you die. Thus death typically results from respiratory failure.* And tetrodotoxin is potent, too. As little as 20 mg, consumed orally, is the estimated amount to bring about death in an adult, and there is no antidote. Injected, as little as 1-2 mg will cause death, making it one of the more lethal substances around. [For comparison, a drop of water is about 50 mg, so envision 1/50th of a drop of water killing you. Crazy, huh?]

* A forensic pathologist I worked with liked to joke that everyone dies from asphyxiation…you stop breathing when you die. You’ll just have to trust me that it’s funnier when they say it.

And death is the worst outcome from improperly prepared fugu. In the body, most drugs and poisons accumulate in organs, and this is true of tetrodotoxin, where highest concentrations are found in pufferfish liver and internal organs, including the ovaries.** A slip of the fugu-hiki knife into the liver, contaminating the blade while preparing the rest of the fugu, can cause signs of poisoning – like the sought after tingling and numbing of the tongue and mouth. And in extreme cases, if an internal organ like liver is mistakenly served, death could occur. But fear not, serving fugu liver in Japan has been banned since 1983. Still, every year there are about 50 cases of fugu poisoning, with about 3 deaths, but the vast majority of those are cases of mistaken identity from anglers, not sushi bar mishaps.

** Pufferfish poisoning was “discovered” by Capt. Cook and his crew in 1774, when strange, spiky pufferfish were brought on board. The crew dined on the flesh, and the leftover scraps and organs were fed to the pigs. The crew members became weak and ill, but the same can not be said for the pigs. They died.

The actual source of tetrodotoxin, however, is not the pufferfish itself – or blue-ringed octopus, newts, and various worms and crabs that also contain the paralytic poison. Rather, tetrodotoxin is likely produced by the bacteria Vibrio alginolyticusm, which are found in the intestines of pufferfish and others, and make up the poisonous part of their microbiome. If you’re not familiar with the word, microbiome is just the collection of microorganisms that share our bodily space. It’s science’s newest hot topic.

Interestingly, pufferfish grown in captivity or artificially inseminated do not have any tetrodotoxin unless they are introduced to Vibrio. Enterprising fish farmers now raise tetrodotoxin-free fugu, with some restaurants even (illegally) serving its liver. But really, what’s the point? Without that element of danger and ever so slight brush with death, it’s just a poor tasting piece of raw fish.

What’s dangerous is homicide, and that’s what a Chicago area native had in mind for tetrodotoxin. Edward Bachner III, under the guise of Dr. Edmund Backer, purchased 98 mg of tetrodotoxin for the purpose of killing his wife. Tetrodotoxin is legal to buy for research purposes by a scientist, as long as the amount in control by the researcher is under 100 mg. He was initially charged with illegal possession of a Federal Select Agent, then hit with attempted murder when his scheme for killing his wife – and collecting on a $20 million life insurance policy – came to light. And if that’s not enough, he was also in possession of syringes (to inject her, presumably), two passports (for the getaway), a fake CIA identification (for the new secret agent identity), a pistol (spies get in a lot of gunfights, duh), and a grenade (just in case). He was sentenced to 8 years in prison. Ridiculously – no, really – his wife still loves him, and they remain together. Even though he planned to kill over the course of 3 years! Love isn’t blind, it’s stupid.