Now for something a little different. I like to write about Nature’s Poisons – their history, science, chemistry, and toxicology. It’s fun for me, and hopefully for you, too. But just because something is harmful or toxic, doesn’t mean it can’t be delicious. Take chile peppers and capsaicin, it may be potent and cause some people discomfort, but there’s something about it that keeps people coming back for more. If you follow me on twitter (@NaturesPoisons), then you know I also like to garden and cook. So I’ll take this post to talk about Cooking with Poison, and combine all my loves.

Not to go all hipster on you, but I’ve been a fan of sriracha sauce for nearly 20 years. It was at Pho 777, a Vietnamese hole-in-the-wall restaurant in downtown Reno, NV that I first started using it, and I’ve been in love with it ever since.* When we moved to southern California, sriracha was there. Literally, it’s everywhere in California. In South Carolina, we brought it with us. I’d see it around at a few places, where people called it “Rooster sauce”, for the rooster logo on the squeeze bottle. Maybe sriracha was too hard to pronounce. And in North Carolina? It’s right beside me. Really, it’s sitting right next to me as I type. It’s my muse.

* Pho 777 has what I still consider the best Pho, and Vietnamese food, I’ve ever had. And for those that don’t know, pho is a Vietnamese noodle soup of broth, flat rice noodles, and meats and veggies of your choice, though the meat is usually beef. Throw in some Thai basil leaves, chiles, bean sprouts and sriracha, and you’ve got a party. The best part of Pho 777 though was the price – a huge-ass bowl of steaming hot pho for $3. Just right for the starving grad student.

So just what is this sriracha sauce I’m talking about? It’s a hot chile sauce hailing from Si Racha, Thailand, and originated in the 1930’s. Or so I’m told. There are a lot of varieties and styles, but as far as I’m concerned, in the United States, there’s only one true commercial sriracha, and that’s Huy Fong Food’s. Started in 1980 by David Tran to feed his craving for the hot chile sauce after arriving in Los Angeles, Huy Fong processes 100 million pounds of fresh chiles to produce 20 million bottles a year, using the same ingredients as day one:  red jalapenos, vinegar, sugar, garlic, salt, and a bit of potassium sorbate, sodium bisulfite and xanthan gum. Those last three are a food preservative, an anti-oxidant and color preserver, and a thickening agent, respectively.

Today, there are a ton of knock-offs (Sriracha by Texas Pete? Hell. No.) and sriracha everything. Ice cream, chips, pocorn, and even beef jerky. And then there’s the countless cookbooks, reality cooking TV with sriracha themes, and sriracha-everything recipes online. I do believe we’ve hit the saturation point for sriracha.

I grow a ton of jalapenos each year. Usually about 20 plants that I start from seed each year. Besides using them fresh, I pickle the green ones to eat year-round, and because I often don’t pick them in time, I’m left with just as many red jalapenos. So what to do with red jalapenos, besides turning them into chipotles? Make sriracha of course!

This recipe is based upon Michelle Tam’s “Paleo Sriracha” – it’s what cavemen would have put on their pho. If cavemen had sriracha. Or pho. A key difference from the Huy Fong commercial stuff is that they ferment their red jalapenos, and Michelle lazily – which I wholeheartedly endorse – skips the fermentation and mimics that “umami” with the use of fish sauce. If you’re unfamiliar with fish sauce, it’s just liquid drippings from fermenting fish . . . and it smells like it too. It’s prevalent in most southeast Asian cooking, and dishes just aren’t the same without it. In a nutshell, you can’t taste the fish sauce in the dish, but you know when it’s not there. So just use it.

If you want a milder sauce, seed the jalapenos. For hot, don’t. We like ours hot, that and I’m too lazy to seed them. Most people will say to wear gloves when working with chiles. I don’t. I like the burn, but just be careful what you touch. Eyes, your junk, someone else’s junk. You get the idea.

So here’s the recipe. It scales up or down just fine.

Throw everything into an 8 quart stockpot, cover, and let simmer for a few hours for the chiles to get nice and soft. Remove from heat and let cool for a little bit, then go to work on it with an immersion blender. A food processor or blender would work too. Blend it until it’s as smooth as it’s going to get. It may appear a bit thin, but it’ll be thicker when it cools. If you want to, you can always simmer the volume down a bit to thicken even more. Transfer into sterilized pint jars and store in the fridge or process in a pressure canner or water bath for 15 minutes. 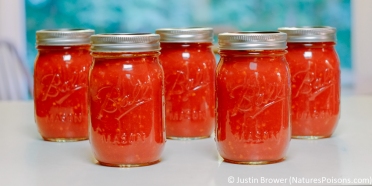 We put ours in a plastic squeeze bottle for ease of use and put it on nearly everything. My wife, who devours much more of it than me, even has a bottle at work. The stuff is delicious. Does it taste just like Huy Fong’s? No, of course not, it’s not supposed to. But it’s bright and alive, doesn’t have xanthum gum that my wife is mildly allergic to, and made from our own peppers. So if you grow your own jalapenos, let some ripen to red and try this out. You’ll thank me for it.

Update 10/16/14: For a good article on the history of Huy Fong and its unconventional founder and CEO David Tran, check out this article.

8 thoughts on “Cooking With Capsaicin: Sriracha”