“The use of foxglove is getting abroad, and it is better the world should derive some instruction, however imperfect, from my experience, than that the lives of men should be hazarded by unguarded exhibition, or that a medicine of so much efficacy should be condemned and rejected as dangerous and unmanageable” 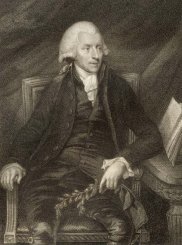 This is from the preface of Dr. William Withering’s “An Account of the Foxglove and Some of Its Medical Uses,” published in 1785 (1). It is more of a journal than a book, and documents his trials with foxglove one patient at a time. It is real, honest, and above all open. I could say “to a fault,” but shouldn’t all trials and patient experiments work this way? Alas, too much fear nowadays of being sued or missing a clinical trial endpoint.

The malady of the day that Dr. Withering treated was “dropsy,” which we know as edema today. It is characterized by the accumulation of water and swelling in soft tissues, particularly the feet and legs. Many patients complained of asthma or shortness of breath, general lethargy, and a fast, but weak pulse. The treatment at the time (pre-American Revolution!) consisted of bloodletting, blistering, laxatives, all of which were simply ways of getting “toxins” out of the body. These procedures began to change with Dr. Withering’s “discovery” in 1775.

Dr. Withering recounts being told about an elderly herbalist in Shropshire that “had sometimes made cures after the more regular practitioners had failed.” The side-effects were violent vomiting, but the diuretic effects pronounced – another way to get fluid, responsible for the swelling, and “toxins” out of the body. The old woman’s concoction was composed of over twenty different herbs, but Withering, being a skilled botanist, quickly honed in on foxglove as the active constituent.

Foxglove is the common name given to the members of the genus Digitalis, a group of about two dozen plants native to western Europe. The most common member is Digitalis purpurea, and is seen in gardens throughout the world, with vibrant flowers growing from stems that can reach six feet tall. The clustered flowers are usually purple, but also appear in various shades of pink, white, and yellow. They are definitely magnificent to behold. 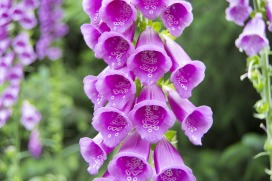 The first case in which he used foxglove occurred on December 8th, 1775. A fifty year old man came to Dr. Withering for some free advice and presented with shortness of breath, a large belly, and fluctuation (I’m assuming in the heart). He gave the man a decoction of foxglove which made the man extremely sick for several days, but also allowed the man to make “a large quantity of water.” After the tenth day the man resumed eating and apparently became better.

During the course of treating, and recording, 163 cases over 10 years, Dr. Withering concluded that he was no doubt poisoning a great deal of his patients. In particular he learned that it was not necessary to bring about vomiting in order for the foxglove to work, and in fact probably hindered the treatment. And if the foxglove induced “purging” (diarrhea), it was sure to fail, so Dr. Withering would dose the patient with a small amount of opium to “restrain the action on the bowels.” Such a clever man!

We know now that the majority of these “dropsy” cases that Dr. Withering treated were in fact cases of congestive heart failure. Symptoms include labored breathing, fatigue, and edema. The cause of heart failure is a malfunction in the heart that causes a ventricle to either not fill with blood or not eject blood once filled. Your body needs blood, and the oxygen it carries, to survive, so it compensates. To get blood pumping again the body increases blood pressure and releases hormones to constrict blood vessels, with the net effect of increasing heart rate. If it sounds like an engine running faster and under more pressure is a recipe for disaster, you’d be right. Another consequence is the body increases its sodium and water stores, leading to edema. Unfortunately, the body does such a good job in compensating for heart failure (short term) that many are unaware of any problem. (2)

So how does pretty foxglove play a role? It sounds almost too good to be true: “Heart failure? Here, have a flower.” But foxglove is special, in nearly all parts of the plant it contains a cardiac glycoside called digoxin, as well as digitoxin. It may sound complex, but a cardiac glycoside is just a chemical that has sugars on it (glycoside) and affects the contraction forces of the heart (caridac). Simple, huh?

Digoxin, and digitoxin, work by binding to, and inhibiting, the alpha-subunits of sodium ATPase, called the “sodium pump”, in cardiac muscle. This increases calcium concentration inside the cell, and promotes sodium-calcium exchange which increases the force of cardiac contraction and cardiac output. By pumping harder, and pushing more volume of blood out, the heart rate can slow (3). You’ve still got some issues, but at least you’re not going to pop. Digoxin is still used frequently today, which I find remarkable

There’s no such thing as a free lunch though. The therapeutic index for digoxin is low, meaning the ratio of amount of drug to do harm to amount of drug to do good, is small. Notable side-effects of digoxin therapy are nausea, vomiting, and diarrhea. Check, check, and check – all things observed by Dr. Withering. What compounds things even more for the good doctor, and something he mentions in his treatise, is the extreme variability in digoxin concentration in Digitalis (though digoxin itself was unknown to Dr. Withering at the time). Drug concentration varies with location, weather, time of year, soil fertility, and any other innumerable things. So accidental overdoses are not exactly rare, nor are intentional poisonings, something I like to call homicide.

Because this is “Nature’s Poisons” I have to include some sort of nefarious poisoning or death, and I’ve got a good one for you. In 1933 a German otolaryngologist – that’s an ear, nose, and throat (ENT) doctor – wanted to get rid of his girlfriend. Breaking up with her must have seemed too difficult for him, so he decided to kill her instead. Under the guise of conducting a physical examination of her, he placed digitoxin on his glove and administered the poison rectally. Because that’s what all ENTs do, right? She survived long enough to tell authorities her suspicions, and her boyfriend was apprehended and charged with murder. The doctor was tried and found guilty (4). There’s a poop or “caught brown-handed” joke in there somewhere, but I’m much too sophisticated to call attention to it.

Dr. Withering, thanks to his journal and record keeping, not only brought a new treatment to the medical community, but validated the use of previously derided herbal folk remedies. He was also a remarkable man, and able to see things for what they were and proceed with an open mind. He spent much of his time treating the poor, opposed slavery, and protested the use of liquor. Two out of three isn’t bad, I guess. As an intellectual he was a member of the famous “Lunar Society” and rubbed elbows with James Watt (inventor of the steam engine), Erasmus Darwin (grandfather of Charles), Joesph Priestly (discoverer of oxygen and inventor of soda water), and even Benjamin Franklin (5, read for an excellent biography of Dr. Withering).

So while you are out in the wild or planting them in your garden, be aware of foxglove and the dangers it possesses. Seek help or call poison control if someone, or a pet, ingests any amount. And while you’re staying safe and gazing upon your lovely flowers, reflect upon the extraordinary life of Dr. Withering and the good that can come from an open mind, a willingness to learn, and the ability to learn from one’s mistakes. As for me . . . I’ll never look at my ENT the same way again.

16 thoughts on “How to Treat a Broken Heart, or Poison Your Lover, with Foxglove”