In search of a psychedelic high, some teenager, somewhere, will turn to nutmeg.  Yes, that aromatic spice used in pumpkin pie and eggnog can take you for a trip.  And people have been trippin’ on nutmeg for centuries. 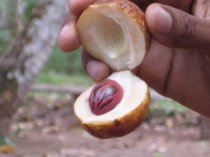 Nutmeg dates back to Indonesia and the “Spice Islands” near the turn of the 16th century.  Then, much of the area was controlled by the Portugese, and in particular, the Banda Islands.  At the time, these islands were the sole locale of Myristica fragrans, otherwise known as the nutmeg tree.  The nutmeg tree is a 10 meter, bushy, evergreen that grows best in wet, tropic locations.  Its fruit will split open, revealing a brown seed covered with a bright red lattice.  The brown seed is nutmeg, and the red coating when dried and ground is the spice we know as mace.  Indigenous peoples have used nutmeg for centuries to treat illness of the stomach and kidneys, as well as just about everything else. (1)

Nutmeg also has a long, relatively speaking of course, history as a hallucinogen.  Many (now) prominent peple have published on its psychedelic effects.  This includes Dr. Andrew Weil, he of healthy living fame (2), Albert Hofmann of LSD fame (3), and Alexander Shulgin, the “Godfather” of synthetic hallucinogens and PiHKAL fame (4).  That right there is a Mount Rushmore of something – minus Teddy Roosevelt, but everyone forgets about him anyways.

So these three titans, for diverse reasons, spent time and effort investigation the role of nutmeg as a hallucinogen, so there must be something to it.  As early as 1576 there is reference to an English woman who became “inebriated” and delirious after consuming 10 nutmegs (1).  And for you uber geeks, even Jan Evangelista Purkinje (we named some brain cells after him!) experimented with nutmeg and had hallucinations that lasted several days (2).

The chemical substance behind this?  Myristicin.  [If it looks a bit like Mxyzptlk to you, put down the comic book.]  I always like to know the pharmacolgy behind these drugs and poisons.  Activity at the receptor level explains so much, and without it I feel a bit lost.  That’s how I feel about myristicin.  Lost.  There just isn’t any good data on how exactly myristicin works – what it binds to, what it activates.  Shulgin’s hypothesis is probably best (4).  He proposed that myristicin becomes aminated in the body, presumably the liver, to MMDA.  MMDA is a known hallucinogenic, extremely similar to MDMA (Ecstasy) and behaves as a serotonin receptor agonist at the 5-HT2A receptor.  This receptor is known for the “classical” psychedelic experience.  Shulgin’s hypothesis was put to the test in liver models, and myristicin did indeed biotransform into MMDA (5).  There has been no evidence to date, however, of this happening in animal models or in humans.

So what can one expect from myristicin and nutmeg consumption.  It appears to be a mixed bag, but the consensus seems to be a pretty crappy trip from the sounds of it.  In all of my drug talks I try to be fair, and with apologies to Clint Eastwood, give examples of The Good, The Bad, and The Ugly.

The Good, via Erowid (6), and after feeling nauseous, sick, and passing out:
“I felt like I was walking on air all the next day and colors looked brighter.  Things that weren’t moving had a swaying sensation, and things sounded warped. Everything was absolutely beautiful.”

The Bad, via Erowid (7), and after downing a bottle of nutmeg with a friend:
“It was at this point that I thought I was going to die, but I didn’t care. I was getting visual hallucinations out of my peripheral vision that left me feeling very vulnerable and helpless. I had my girlfriend take me outside where I proceeded to puke my guts out in front of all my friends. If I was in a distance puking contest I would have won.”

And The Ugly, via Erowid (8), and after a month of using:
“The side effects of dry mouth and slight nausea all disappeared in the normal time period (about 12 hours), but other effects stayed: the ‘out of it’ mood, screwed up vision and depth perception, and occasional returning feelings of ‘tripping’ and lack of balance, especially under the influence of caffeine, which seemed to amplify the effects. My depth perception has been screwed up for more than two weeks, my vision wavers and does hallucinatory things when viewing patterns, and I can’t shake my feelings of removal from my surroundings.”

Most of the experiences I read are from male teenagers that are unable to score any other hallucinogen, and after talking with other teens or searching online, decide to try nutmeg.  It just doesn’t seem worth it, to me.  I have a feeling it’s more of a joke being played on people: “Hey, nutmeg is awesome, you gotta try it . . . snicker, snicker.”

Poison control data from California (9)  backs that up.  The male teenager part.  Over a 12 year period, intentional administration was 78% male and 80% ages 13-20.  About half went to an emergency department and had minor to moderate outcomes.  The most common symptoms were tachycardia, vomiting, agitation, and hallucinations.  Good times, good times.

So despite being relatively non-toxic, it always depends upon the dose and the person.  And if myristicin really is being metabolized to MMDA, then liver function and other foods and drugs on board will play a role.  There are countless records of adverse events and calls to poison control centers, but only two deaths that I am aware of.  The first occurred (date unknown) in an 8 year old boy who ate two nutmegs and became comatose (10).  He died 24 hours later, and the symptoms were reported as similar to that of opium.  The second is a 55 year old male that presented with nutmeg in the stomach contents at autopsy (11).  There was no other clear cause of death, and postmortem serum myristicin concentration was 4 mg/L.  That sounds impressive, but with precious little postmortem data we can’t make much of it.

The take home message is that even something as simplistic and innocuous as nutmeg can present dangers.  And if you can choke down enough, you may find yourself in trouble.  Serious trouble?  Probably not, but a trip you probably wished you never took.

14 thoughts on “Myristicin: Trippin’ on Nutmeg”