So with the St. Valentine’s Day drawing near it makes sense to mention aphrodisiacs. In a nutshell an aphrodisiac is anything that increases sexual desire, and draws its name from Aphrodite, the Greek goddess of love. I most often read about aphrodisiacs as being used by men on women to increase their libido, or sexual desire. If you expand the definition of aphrodisiac to include anything that makes sex more attainable, or likely to happen, then that would open the door to include things that allow it to happen. You know, things that allow a dude to pitch a tent and get rid of that floppy jalopy. 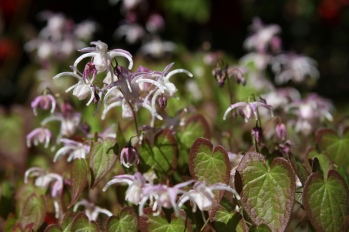 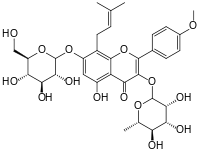 In the body icariin acts as a  phosphodiesterase type 5 (PDE5) inhibitor. It works by blocking the breakdown of cyclic GMP in smooth muscle cells. Since PDE5 is present in arterial walls, these inhibitors work to decrease arterial pressure, thus improving the symptoms of pulmonary hypertension (or heart failure). One such PDE5 inhibitor that the world knows so well is sildenafil, aka Viagra, “the little blue pill.” It was discovered during clinical trials that sildenafil also allows blood to flow into the corpus cavernosum penis, giving men erections. Obviously there’s a larger market for helping dudes get it up than treating hypertension (not to mention the clinical trials are much cheaper and shorter), so Viagra was born. Or erected, so to speak.

A little side track here.  I think it’s worth it.  In my Pharma days I once spoke with some R&D and clinical trial managers from Pfizer, and they told how they discovered this “side-effect”.  Once a clinical trial is over, they ask the volunteers for any remaining drug back.  They were surprised as man after man said that they had tossed them, flushed them, or lost them, at a rate much higher than expected based upon other drug trials.  Hmmm, why is this?  So they asked and inquired, and eventually figured it out.  So if the men had returned the drugs like they were supposed to, Viagra as we know it might never have been born.  End of side track.

The obvious question is “how does icariin compare to Viagra?”  Not so well.  But that is to be suspected, right?  I’d like to think that Pfizer, with it’s 9 billion dollar R&D budget, to be a bit smarter than a plant. Kidding, of course.  When compared in PDE5 activity assays, icariin is nearly 100 times less potent than Viagra – 6 micromolar versus 75 nanomolar.  But, if those glycosides, those cyclic sugars attached to each side in the structure above, are replaced with much smaller hydroxyethyl groups, the potency is equal to that of Viagra (1)!