Just about everyone has heard of strychnine.  It’s what I would call one of the “Classical Poisons”, in the same company as arsenic, cyanide, aconitine (Wolfsbane), coniine (Hemlock), and a few others.  But if I had to choose a word to describe strychnine, I would call it “romantic.”  I’m sure you’re scratching your head on that one, but let me explain.

Strychnine is a bitter alkaloid present in the seeds of the strychnine tree, Strychnos nux-vomica.  The tree is native to the tropical areas of India and southeast Asia and introduced to Europe in the 1500’s.  It found use as a vermin killer and rodenticide, but like most poisons, found its way into humans, too.  It’s hay-day for use not only as a way to poison someone but also as a tonic and other forms of pseudo-quackery, was in the late 1700’s to mid/late 1800’s.

Those of you that took my Dad’s Junior Challenge English course in High School – I did, got an A – will remember that the Romanticism movement in literature occurred during the same period of time.  Notable poets of the Romantic period are Wordsworth and Keats, titans both.  In America, the movement is best exemplified by Herman Melville and Washington Irving, writers of the works “Moby Dick” and “The Legend of Sleepy Hollow.”  See Dad, I paid attention.  I should include Nathaniel Hawthorne’s “The Scarlet Letter,” but I just can’t, it’s a tedious bore and Just. Doesn’t. End.

But aside from literature, the Romantic era had a profound impact on the sciences, and strove to break away from complex rationalization and turn instead towards a simpler understanding.  This most likely sprung from a backlash against the Industrial Revolution.  This was also the time that organic chemistry began to flourish, with chemists beginning to understand and piece together the composition of the natural world around them.

And so it was with strychnine.  A pair of French chemists, Joseph Bienaimé Caventou and Pierre-Joseph Pelletier, isolated strychnine in 1818, which finally allowed for pure preparations to be used.  The first synthesis of strychnine though did not occur until 1954 by The Robert Woodward.  Yes “The,” a chemistry hero if there ever was one.  But now that strychnine could be isolated it could be used for any number of things, and not just as a rat poison. 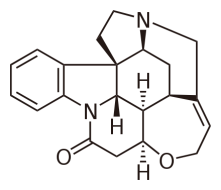 The mechanism of strychnine’s toxicity stems from it being an antagonist of the glycine receptors (1).  Glycine, an amino acid, is an inhibitory neurotransmitter that essentially slows down and controls the activity of motor neurons.  In the presence of strychnine, which binds 300 times greater than glycine, the neurons are no longer regulated by glycine and become hyperpolarized (2).  The neurons are running wild.  Think of it like the firing order of the cylinders in your car – they are fired in a specific order so that the car is well balanced and runs smoothly, and regulated by an Engine Control Unit (ECU).  If the ECU is out of whack, and the cylinders fire in fast, random order, then the engine shakes and seizes.  The glycine receptors are like the ECU.  With toxic amounts of strychnine your body convulses and seizures occur, ultimately resulting in death due to asphyxiation and respiratory arrest.  It is a violent and horrific death.

Lethal doses are generally estimated at around 100-500 milligrams (0.1-0.5 grams) for an adult, much less for a child.  Onset occurs in as little as 15 minutes, with convulsions lasting between 30 seconds to 2 minutes (3).  The convulsions are often triggered by stimuli – when your body senses something, neurons want to fire, and if they aren’t controlled seizures occur – so patients are generally kept in quiet, dark rooms.  Death occurs within 5 hours or about 5 convulsions, whichever comes first.  If you survive past 5 hours, you’ve got a good chance of survival.  Standard treatment is gastric lavage (stomach pump), which seems to be falling out of favor, and benzodiazepines or phenobarbital to control seizures.  The use of physostigmine, which indirectly stimulates acetylcholine receptors, could also be investigated to counter strychnine’s anticholinergic effects.  But the worst aspect is that poisoned victims are alert and conscious the entire time, and aware of their impeding doom.

A significant clinical sign of strychnine poisoning is severe lactic acidosis (low blood pH, i.e. acidic).  In one case an individual snorted two lines of cocaine that had been adulterated with strychnine(4) .  He had a blood pH as low as 6.55 and a temperature of 109 degrees Fahrenheit (43 Celsius).  The crazy part is that he lived! 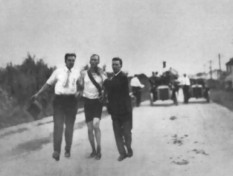 There are a lot of historical poisonings and suicides due to strychnine, and I may discuss them in other posts in the future, but lets talk about other uses for strychnine.  Other uses?  As in ones that don’t kill you?  That’s right.

Around the turn of the 20th century people used it in low doses as a stimulant.  I guess as a way to make those neurons fire just a little bit faster.  Strychnine was injected by the 1904 Olympic marathon “winner” Thomas Hicks prior to the race in St. Louis.  With a little brandy thrown in for good measure.  The person that crossed the finish line first, Fred Lorz, rode in a car for 10 miles.  He meant to tell the judges, but just forgot, I guess.  Either way, no gold for him. But Hicks, assisted by his crew with another shot of strychnine during the race, got the gold.  It seems that strychnine wasn’t viewed as a competitive advantage, so he got to keep the medal.  They should have just given the medal to beret wearing Félix Carbajal, a Cuban, who lost all his money gambling in New Orleans and had to hitchhike to St. Louis.  He also showed up wearing pants, which one of his competitors took a pair of scissors to and made into shorts (5).  You can’t make this stuff up.

I’ll leave you with one last tale of woe.  In May of 1892, writer Henry Randolph, son of publisher Anson D. F. Randolph, cried out in pain.  His sister, Gertrude, and his nurse William, rushed to his aid.  For weeks Henry had suffered from “nervous prostration” (he must have been a freelancer), and was taking quinine powders.  On this night, however, he woke up at 2 a.m. and did not want to awaken his nurse, so he reached into his drawer and pulled out what he thought was his tonic, mixed it, and drank it.  What he had grabbed instead, was strychnine, which he had purchased weeks earlier and forgotten about.  He had the symptoms discussed earlier of convulsions and seizures, all while being lucid and begging the doctors to save him.  At 5:30 a.m. he had one last convulsion and died.  The reason for purchasing strychnine in the first place?  He wanted to kill a cat. (6)

Strychnine for me harks back to a period of time in which scientific advancements were booming, yet poisons remained simple.  The Romantic era of poisons.  As time passed, humans evolved to find new, inventive ways to poison themselves and others.  And with each passing year Forensic Toxicologists evolved with them.  But the most important lesson to be learned?  Don’t try to kill New York cats.

12 thoughts on “Strychnine: Last of the Romantic Poisons”